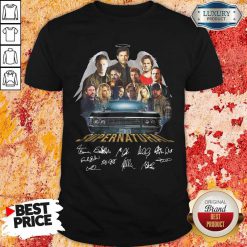 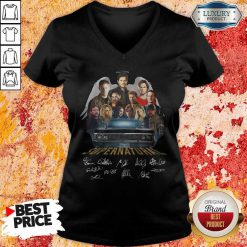 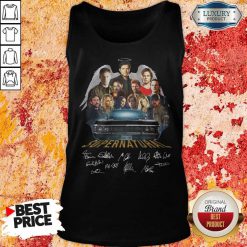 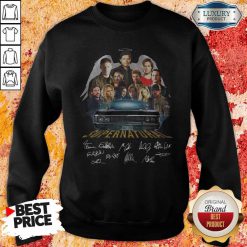 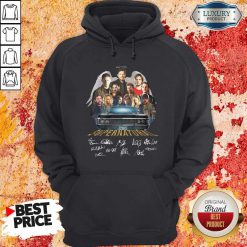 Man, 2 shows I worked on Nice Supernatural Anniversary Signature T-Shirt where the swag (stuff we all get) has aged like milk: my Cops T-shirt and my beach towel & gear from The Apprentice. The shirt was actually a really nice quality T, but that towel has been bathed in cat hair and moreover the years. At least you’re fucking trying, I give anyone a pass if it looks like they’re doing w/e they can. I’m sure some people can’t even afford proper masks, but goddamn bless em for trying. It’ll always be a good idea during flu season, and maybe for seasonal allergies! I got some cotton masks off Etsy, basically t-shirt material. I wash them in a mesh laundry bag with my regular load and dryer.

Well, going against the Nice Supernatural Anniversary Signature T-Shirt grain here but I just throw them in with the rest of my laundry and wash them in the washing machine. Air dry. But… Yeah, I’ve put them in the dryer. No harm was done, at least for the ones I’ve got. I hate to be the bearer of bad news, but the masks mostly protect others from you, not you from others. This is why everyone wearing them is so critically important. To protect yourself, check the airflow of the room you work in. Fresh air needs to be coming in and replacing the static air with regularity. The bigger space the better – high ceilings good. Open windows and doors good. Circulating air pumps good. If you are in small rooms and close quarters, and one of your coworkers gets ill…

You will all likely get ill. Catching COVID is Nice Supernatural Anniversary Signature T-Shirt a result of the exposure amount plus TIME. The masks buy you time by reducing the exposure (infected person coughs most of the virus into their mask, leaving a smaller virus load in the room). As for washing… handwash with Woolite or some other mild cleanser – I think this is as much to get grease off the mask as it is to kill viral loads. I imagine face oils would allow viruses to “stick” to the mask better… of course, I’m talking out of my ass here… research is better than my opinion and guesswork. I wash my mask about once a week, but I don’t go out much.